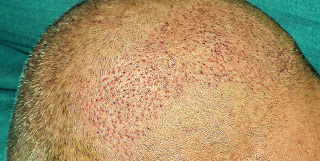 FUE is the latest technique in hair restoration nowadays. Many  novice clinics and physicians are offering FUE as the most  advanced ultimate solution for hair loss. Some times it is even presented as 'non-surgical' hair transplant especially by non specialist doctors offering 'cheap but best' hair transplant deals. An aware patient knows that FUE & Strip are both harvesting same hair roots and therefore neither is absolutely superior to other. Also, each procedure has its  own set of disadvantages, which must be brought to prospective  patient's notice,  before mutually deciding upon the technique  of restoration.  While, there are inherent  advantages of FUE , which I have discussed before, proclaiming that FUE is 'always'  the   best is stretching the truth too far. One problem that FUE holds is the number of grafts that can be  harvested in one session of transplant. Although, a larger number  of grafts can now be
Post a comment
Read more 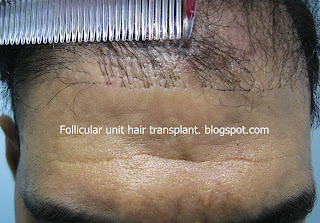 During hair transplant consultation, many of my patients bring old photographs from their prime years. Most often this is done with the good intention of giving me an 'idea' of the hair loss. Hidden inside that good intention is the expectation that their new hairline will look exactly like it used to be. As a plastic surgeon , this puts me in a tight spot. While old photos are valuable to me for assessment regarding design and pattern of hair loss, the extent of restoration depends solely upon the availability of hair in donor area and patient’s commitment for multiple sessions. My primary goal during reconstruction of a new hairline is natural appearance. A mature natural hairline looks far better than a low unnatural hairline any day. In fact low hairline is a hallmark of an inexperienced surgeon, who often becomes a ‘yes man’ and harms the patient in long run. So, what makes an ideal hairline? You can find it yourself. Discreetly, try to observe the hairlines of
Post a comment
Read more

At present Finasteride 1 mg is considered 1st line therapy and is the only FDA approved oral medicine for androgenic alopecia, the common male pattern baldness. As a hair transplant surgeon I prescribe it to some of my patients who have sufficient amount of hair in balding zone and who do not want another session in near future. In some of these patients, I have seen strong resistance and bias against Finasteride. This bias, mostly generated through internet 'research', is sometimes so strong that it persists even after thorough counselling. Since it is impossible to give details to every individual in person, I am writing this post. What is Finasteride? Finasteride is an enzyme blocker used for Benign Prostatic Hypertrophy in high doses(5mg) and for male pattern baldness in low dosage form (1mg). How does it work? Finasteride inhibits type II 5-alpha-reductase, the enzyme that converts testosterone into dihydrotestosterone (DHT), which is responsible for the p
Post a comment
Read more 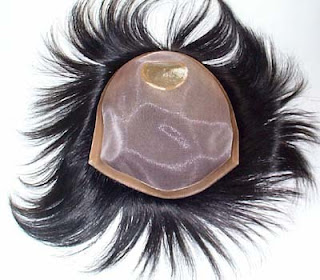 A question frequently asked by my patients is about hair weaving and bonding. Some of them think it is a variety or technique of hair transplant . In fact, it is not. These are just ways to attach artificial non growing hairs or wig to your scalp. This confusion has occurred because clever new age salesmen wanted to overcome the negative connotations that the words "wig" "hairpiece" and "toupee" conjure up in the minds of most men. Instead of calling their products wigs, we now have "hair extensions", "hair weaves" or some kind of fancy "non surgical hair restoration systems". Listed below is a list of all the different types of wigs with an explanation of each. Wigs & Toupees Wigs are artificially arranged animal, human or synthetic hair traditionally used to conceal hair loss . Toupees are similar to wigs meant for a smaller area. The most popular way to attach a wig to the scalp is with tape or glue. T
Post a comment
Read more 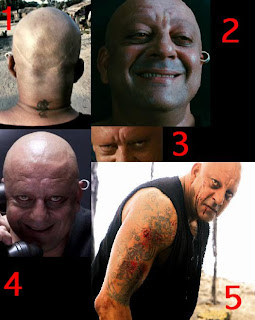 For those of you who do not know, who Sanjay Dutt is, I can tell that he is a big star in Hindi film industry, has done memorable roles in many movies and has led an eventful life so far. For those of you who do not know, who Kanch Cheena is, I can tell that I also did not know about it till a short time ago. Now, I know that Kancha Cheena is the name of  principal  negative character of a Hindi movie called Agneepath. To play the character of Kancha Cheena, Sanjay Dutt went bald. The next logical Q would be, why am I, a cosmetic and hair transplant surgeon , blogging about this? Well you can see the reason in picture no.1 above........ See that nice 'U' shaped scar on the back of his scalp. That's exactly how a hair transplant scar looks like, when strip method is employed. Since this scar had piqued my curiosity, I did a little more googling and came up with this. and this... Mr. Dutt, Circa 2008 Mr. Dutt, Circa 2010 and.. Mr. D
Post a comment
Read more

It is a common knowledge that baldness occurs in degrees and is a gradual phenomenon. Since it is not possible to convey the extent of baldness in words, a classification system was developed by Dr. Norwood. This is the most commonly used sytem today, although other more complicated systems are also available. Broadly speaking, Norwood classification attempts to divide baldness in seven stages with stage I  being normal adult hairline and stage VII being total possible baldness. Although, there are many flaws in this system, it still gives a basic idea regarding the extent of baldness in an individual. Stage I Essentially normal adult male hairline (not to be confused with 'juvenile hairline'). Temporal recessions are well defined   with frontal hairline in normal position. No miniaturisation in crown region. Stage II The frontal hairline shows slight recession(< 2 cm), with more pronounced recession in  temporal area. The "A" vari
Post a comment
Read more

When to Plan Hair Transplant?? 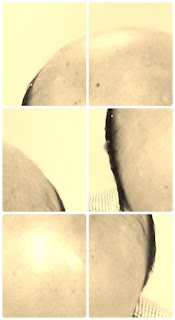 A question frequently asked by many of my hair loss patients is, " Should I plan for hair transplant now? or Should I wait a little longer?" I wish, I had an easy answer to that one. Alas, the real answer is so convoluted that even doctors will find it difficult to grasp. Let us first consider the reasons or indications for hair transplant.  You should plan a transplant if, You have Androgenetic alopecia stage III to stage VII. Your hairline is not appropriate for age or you wish to achieve younger   looking hair line You have burn alopecia or traction alopecia.  You have eyebrow, eyelash or facial hair loss. Now, for each of the above mentioned indications, there is a stronger underlying indication. That is the first question you should ask yourself. And that question is, " How bothered am I with my hair loss?" If you are fine with a bald pate; do not let others bully you into a transplant, whatever be your age. But if this hair loss
Post a comment
Read more
More posts

Dr. Sharad Mishra
New Delhi, Delhi - NCR, India
Dr. Sharad Mishra is an expert Plastic, cosmetic and Hair restoration surgeon based in New Delhi, India. He graduated as MBBS from India's top rated Armed Forces Medical College, Pune; followed by prestigious Masters of Surgery degree from KGMC, Lucknow. He then went on to receive highest surgical degree available in India "M.Ch" in 'Plastic & Cosmetic Surgery' from world renowned Post Graduate Institute for Medical Education and Research, Chandigarh. Dr. Mishra holds many years of surgical experience and has taught plastic surgery as 'Assistant Professor in Plastic Surgery' at Dr. RML Hospital and PGIMER of Delhi university. He has performed hundreds of successful cosmetic and hair transplant surgeries, and has also developed a new technique for follicular hair transplant.His research in field of plastic surgery has been published in national and international plastic and cosmetic surgery journals. His contribution in field of hair transplant surgery has been widely acclaimed. He currently practices at Apollo Hospital & Provelus Hair Transplant Clinic, Delhi.